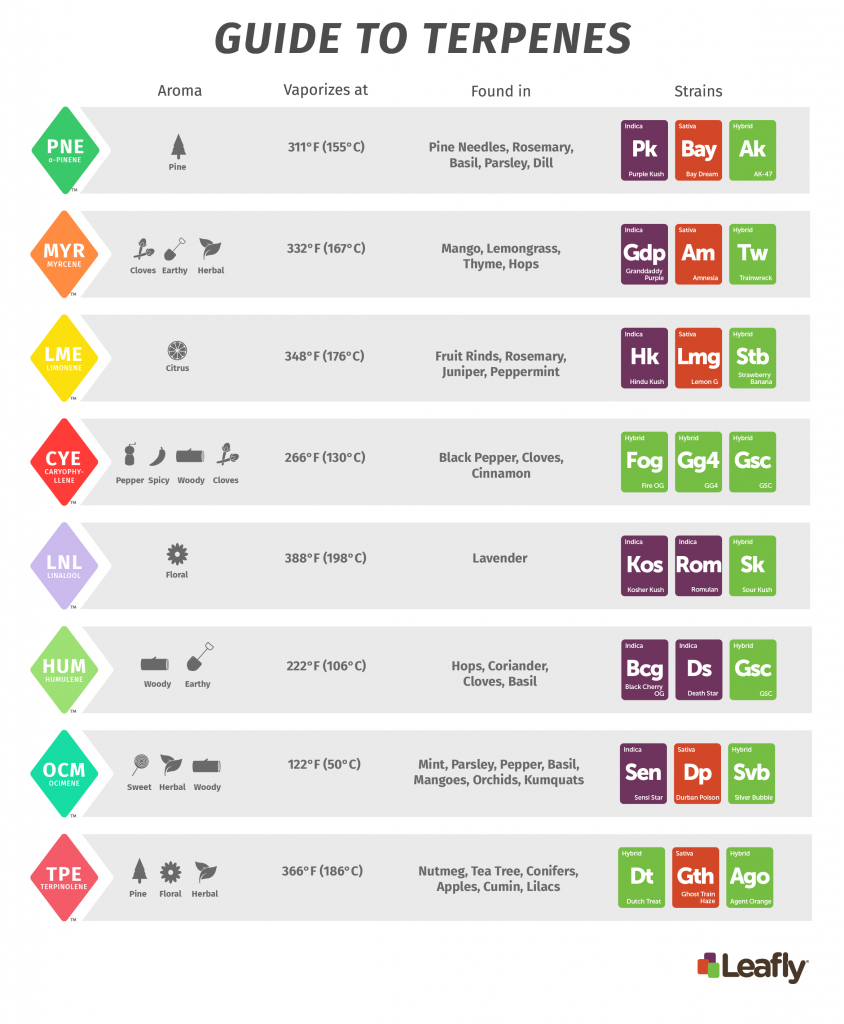 Terpenes give the aroma, flavor and color of plants

Terpenes are organic compounds found in a variety of plants, and contribute to their flavor, scent and color. These substances are the building blocks for essential oils and plant raisins, and are often used in food additives, perfumery and aromatherapy. Some are even thought to have medicinal properties, and to help in fighting bacteria, fungus and environmental stress. Plants like rosemary, mint or basil have a strong terpene profile, and this is why they’re referred to as aromatic plants.

Cannabis at its turn contains a wide range of terpenes (over 200) that are thought to interact synergistically with the cannabinoids in the plant, and to enhance its health effects.

BCP (beta-caryophyllene) for example is a terpene found in the cannabis plant that is known to activate the CB2 receptor in the endocannabinoid system and to exert anti-inflammatory effects. It’s non-psychoactive, and is the first FDA approved dietary cannabinoid, being used as food additive.

Vitamin A is also a terpene, although we don’t generally think of it this way.

Conifers produce large amounts of these compounds, and most plants produce higher quantities of terpenes in the warmer seasons. Each of the different cannabis strains contains its own terpenes, and some are more abundant, hence the different flavors and aromas.

Alpha-pinene for example is one of the most known terpenes in cannabis and is also found in sage and rosemary. It is known to act as a natural bronchial-dilator and expectorant and to help one focus better. It increases the mental energy and can even act as a topical antiseptic.

Limonene, another terpenes found in the cannabis strains, is also present in citrus fruits, juniper and peppermint, and has anti-fungal, anti-bacterial and anti-depressant effects. Moreover, it is suggested that this compound exerts anti-carcinogen properties, and is known to increase blood pressure.

Myrcene is found in menthol, lemon grass and most varieties of marijuana, and is widely used in the perfumery industry. Just like the previously mentioned compounds, it has anti-microbial and anti-septic properties, and acts as a natural anti-depressant, anti-carcinogen and anti-inflammatory agent. It’s a relaxing substance and in marijuana-derived products, it increases the cell membrane permeability, allowing for higher amounts of THC to travel to the brain cells.

Terpenes and hemp oil Unlike marijuana, hemp does not have a strong flavor and is not referred to as an aromatic plant, therefore the terpene profile of hemp is a bit less significant than that of marijuana. But the plant still contains such compounds, and none of them are psychoactive.

Terpenes in hemp have anti-inflammatory, anti-bacterial and anti-viral properties, the most known of them being caryphyllene and myrcene. The hemp plant contains 120 terpenes, but depending on the processing method, these can or cannot be found in the CBD oil. Oil made of hemp seeds is less abundant in terpenes than the similar product obtained from other portions of the plant (Hendriks et al, 1978). Hemp contains mostly monoterpenes and sesquiterpenes (Turner et al, 1980), which can be concentrated into essential oils through steam distillation methods.

Cannabinoids have no smell, so the flavor and aroma of hemp products depends on their terpenes profile.

Ask about what terpenes or essential oils you can add to your CBD to enhance your experience.  Because they really do make a difference!!